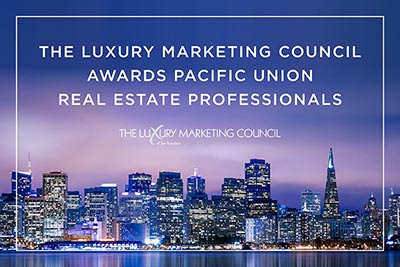 Pacific Union would like to extend hearty and well-deserved congratulations to 17 of our real estate professionals and teams for being named among the Bay Area’s most productive in 2017.

“Every day in this business I am amazed at the combination of grace and fortitude that our people possess,” Pacific Union CEO Mark A. McLaughlin said after July’s REAL Trends rankings. “Their commitment to client service and pursuit of excellence is what their clients revere. I extend special congratulations to each of our recognized professionals.”

In addition to the 17 individuals and teams named below, the Luxury Marketing Council bestowed special honors on two of our San Francisco-based professionals. The organization named Nina Hatvany as 2018’s Real Estate MVP and recognized Val Steele as San Francisco Market Maker for being co-seller of the biggest home sale of the year.

Here are the Pacific Union professionals and teams named to the Leading 100 list:

Congratulations to this year’s honorees for their outstanding achievements!