The rebalancing of Bay Area housing markets that started several months ago continued in November, with buyers taking a notable pause. However, with extra inventory on the market — especially in the more affordable price range — cooling competition, and more price reductions, buyers are seeing more opportunities heading into 2019.

Overall Bay Area home sales declined by 17 percent in November, with all counties and price ranges posting drops from the same time last year. Table 1 summarizes November year-over-year changes in home sales by price range and county. While sales were generally down, a few bright spots remain in Alameda County’s $1-million-to-$2-million range and in both East Bay counties for sales over $3 million. There were about 940 fewer Bay Area home sales compared with last November, with more than 70 percent of the decrease for homes priced below $1 million.

Table 2 also illustrates 2018 year-to-date percent changes in sales compared with 2017 and 2016. While 2018 sales are closer to 2016 activity — only 2 percent below — some areas, such as Alameda, Marin, and San Francisco counties, are still trending above 2016. However, Napa and Sonoma counties show the biggest declines compared with 2016, which could be driven by the impact of the October 2017 wildfires. For more on the impact of last year’s wildfires on Wine Country housing markets, refer to this recent analysis.

Table 2: Year-to-date change in home sales and percent change compared with 2016 and 2017 by Bay Area county

Furthermore, while a county-level analysis might provide an idea of general trends, it’s important to note that recent sales declines varied among local cities. Also, in looking at three-month (September to November) changes compared with the same period last year, there were some areas with notable increases in sales. Table 3 shows the 10 Bay Area cities (those with at least 30 sales in 2018) that posted the largest gains over the last three months compared with the same period in 2017, as well as those with the largest declines. Marin County’s San Anselmo stands out with the largest increase in sales over last year, along with other cities in San Mateo and Contra Costa counties. Cities that saw the largest declines were more widely geographically distributed across the Bay Area. 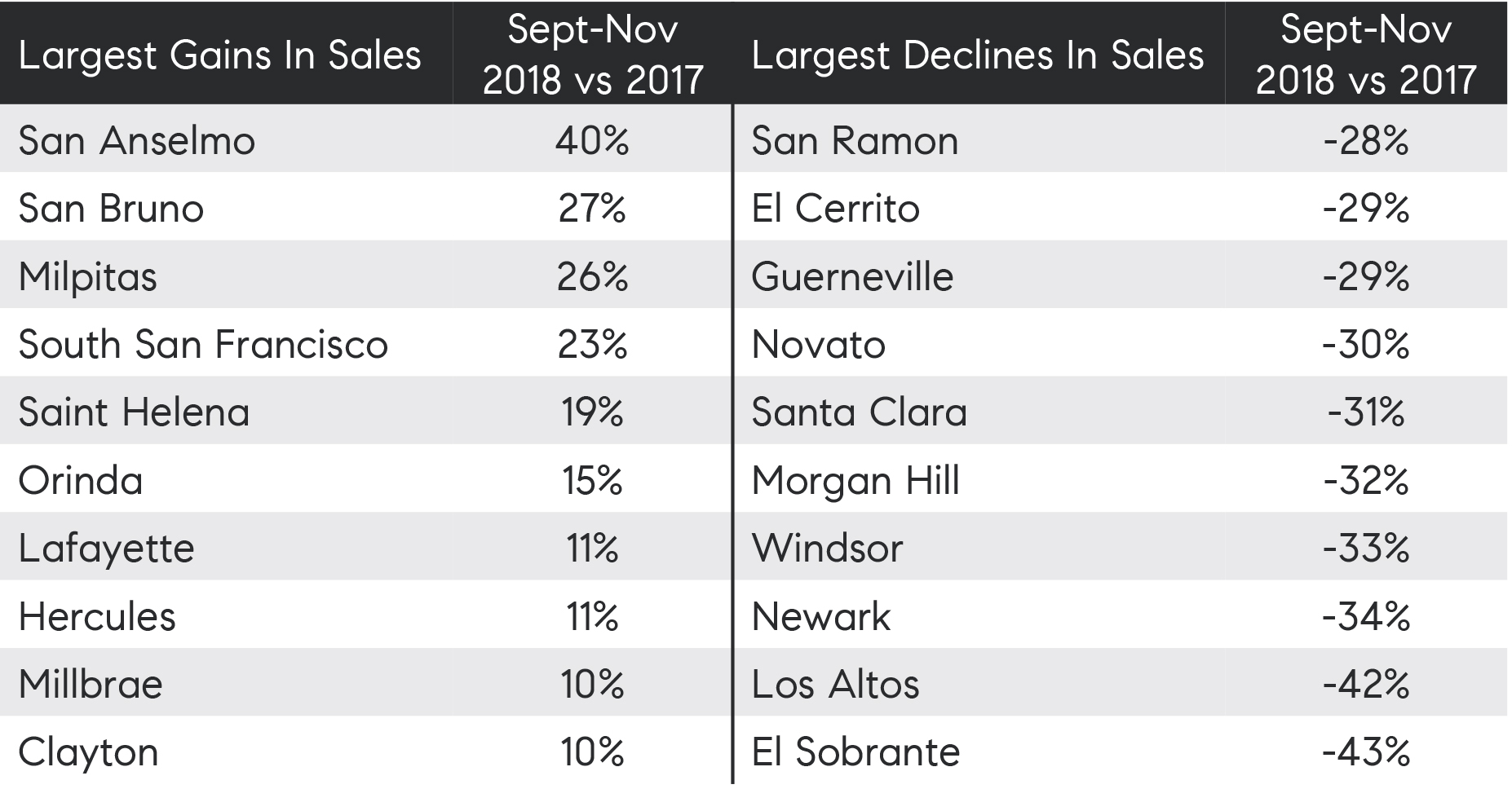 With buyers taking a pause and sellers believing that now is a good time to list their homes, inventory has improved significantly over the last few months, with a 21 percent year-over-year increase in October and a 27 percent annual increase in November. However, looking at the overall Bay Area, average inventory in 2018 is still on par with 2017 and 8 percent below 2015 and 2016 levels. Figure 1 illustrates inventory levels in November over the last three years. Note that while November 2018 levels certainly outnumber last year’s supply, in some markets, 2018 is only slightly above or at 2016 levels. Thus, even with inventory increases, Bay Area housing markets are still historically undersupplied.

However, improved supply levels are a welcome turn of events for buyers. Figure 2 summarizes November year-over-year changes in inventory by price range.  While Santa Clara County outpaced all others for inventory gains compared with last year, average monthly 2018 inventory is still 16 percent below 2015 and 2016 levels. This is also the case for all Bay Area counties except Sonoma, where average 2018 inventory has outpaced 2016 by 4 percent. 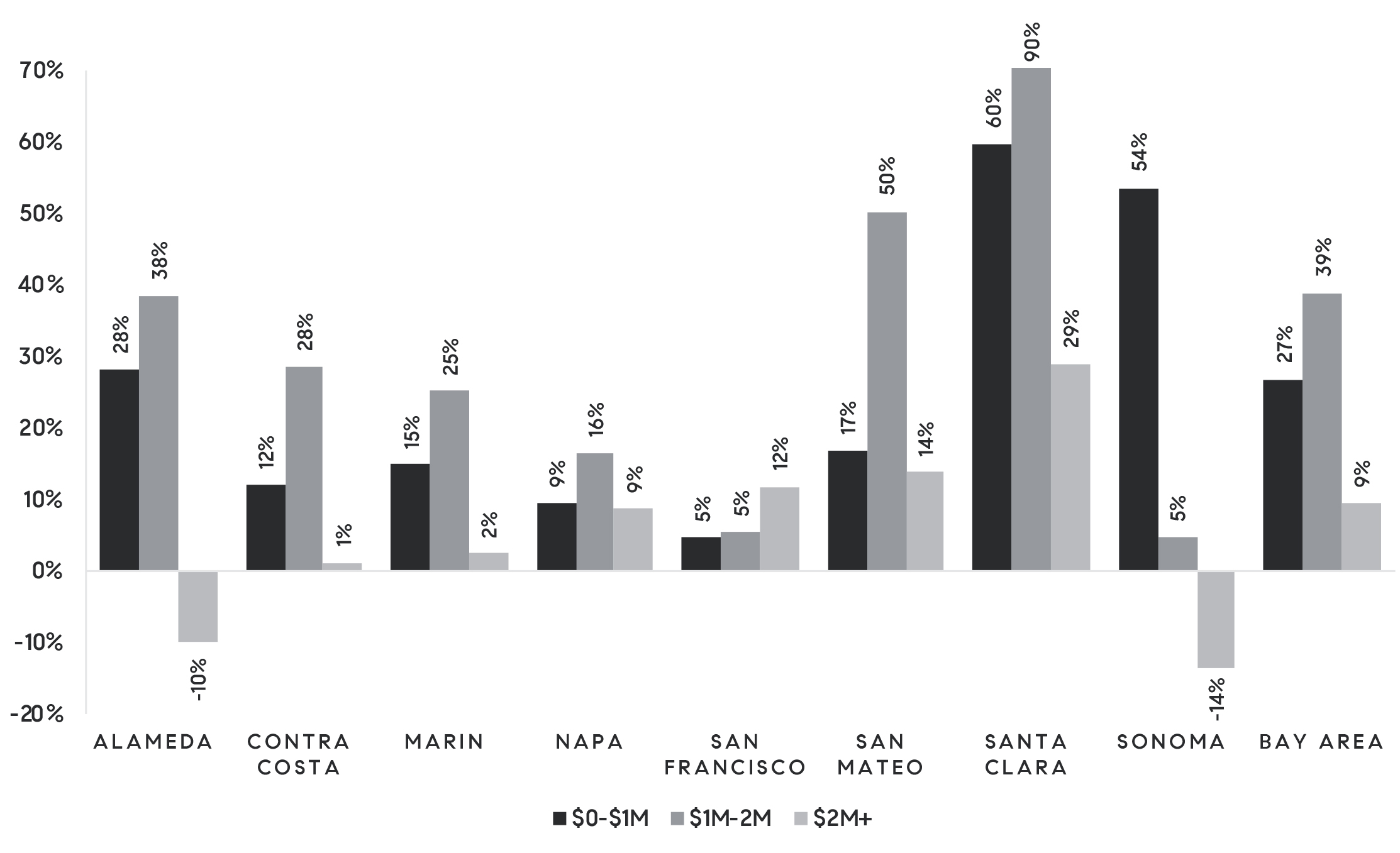 For buyers looking for an opportunity, it is helpful to see where most of the new inventory is available. The heat map in Figure 3 illustrates three-month (September through November) supply changes at a ZIP-code level, with declines shaded in red and increases ranging from orange to green. Green shades suggest an inventory increase of more than 50 percent. Note that for some small ZIP codes, a gain from one to two homes for sale equals a 100 percent increase.

It is interesting to note that many red areas are still present, suggesting that inventory is below last year’s levels, especially in some East Bay areas that benefited from fast home price growth over the last few years. Also, areas accessible to San Francisco, such as southern Marin County, continue to lack supply. Generally, more inventory has become available in areas relatively farther from employment centers and transit options. 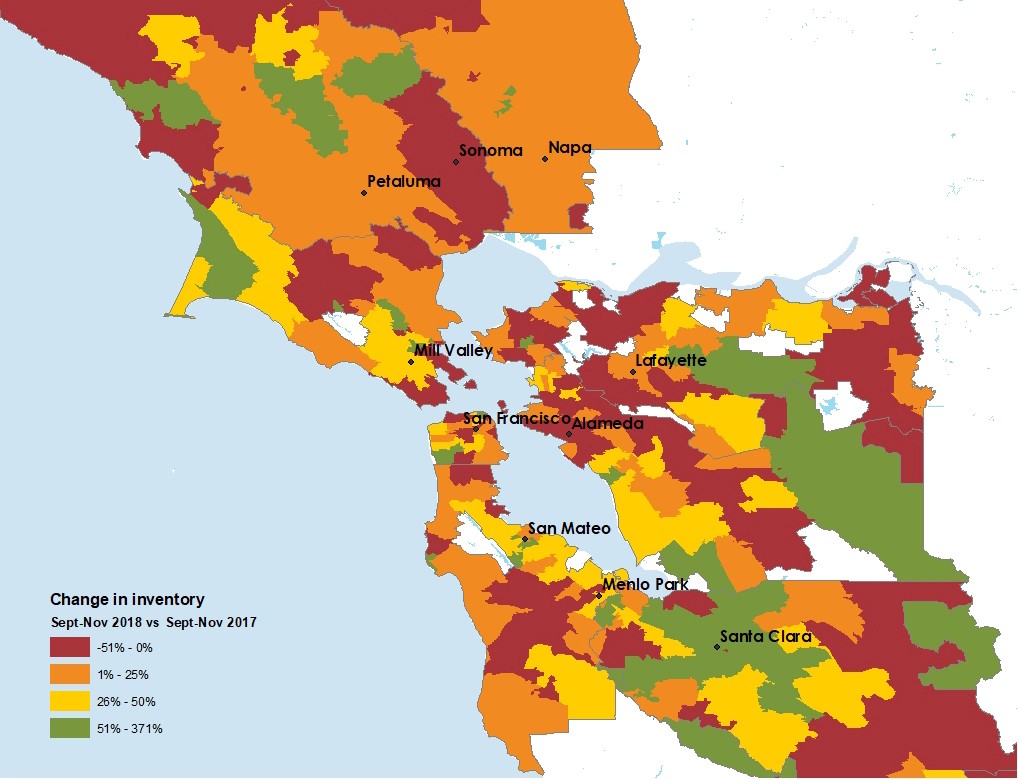 At a city level, Table 4 captures the 10 local cities (those with at least 30 sales in 2018) with the relatively largest increases in inventory and the relatively largest declines. Again, while five of the top 10 cities with the biggest gains are in Santa Clara County, the others are in the East Bay and Marin and Sonoma counties. However, Milpitas, which had the biggest increase in inventory, also ranks as the top city for sales increases. Thus, while at a slower rate than seen in previous months, buyers are taking advantage of the new inventory. Similarly, Clayton and San Anselmo also rank in the top 10 for both supply and sales gains.

Median price growth also reacted to changes in the homebuyer and seller dynamic, with the increase slowing to 3 percent year over year in November. Prices last grew by 3 percent in August 2016. The slowing growth comes amid an average 16 percent gain seen in the first half of the year, thus still putting 2018 year-to-date prices 12 percent above 2017. The most notable trend change is the decline in Sonoma County’s median price, which decreased by 5 percent from last November; however, it’s important to note that the share of homes priced below $1 million increased from 83 percent of all homes last November to 89 percent this year. The change in the sales mix could be contributing to lower median home prices in Sonoma County. Table 5 summarizes median prices by Bay Area county, year-over-year change in November, and 2018 year-to-date change.

Lastly, as inventory rises and home price growth slows, competition has begun to ease, and more homes sold below the asking price, suggesting that buyers have more negotiating power than they did at the same time last year. The share of homes that sold at a reduced price increased by 16 percentage points, from 16 percent last year to 32 percent this year. Increases in price reductions were mostly for affordable homes — those priced below $1 million — and mostly in Santa Clara and Sonoma counties. In Santa Clara County, one in 10 homes below $1 million sold at a discount last November before moving up to three in 10 homes this year. In Sonoma County, reductions in the same price range increased from 24 percent last year to 52 percent now.

Figure 4: Change in price reductions from September through November compared with the same period last year 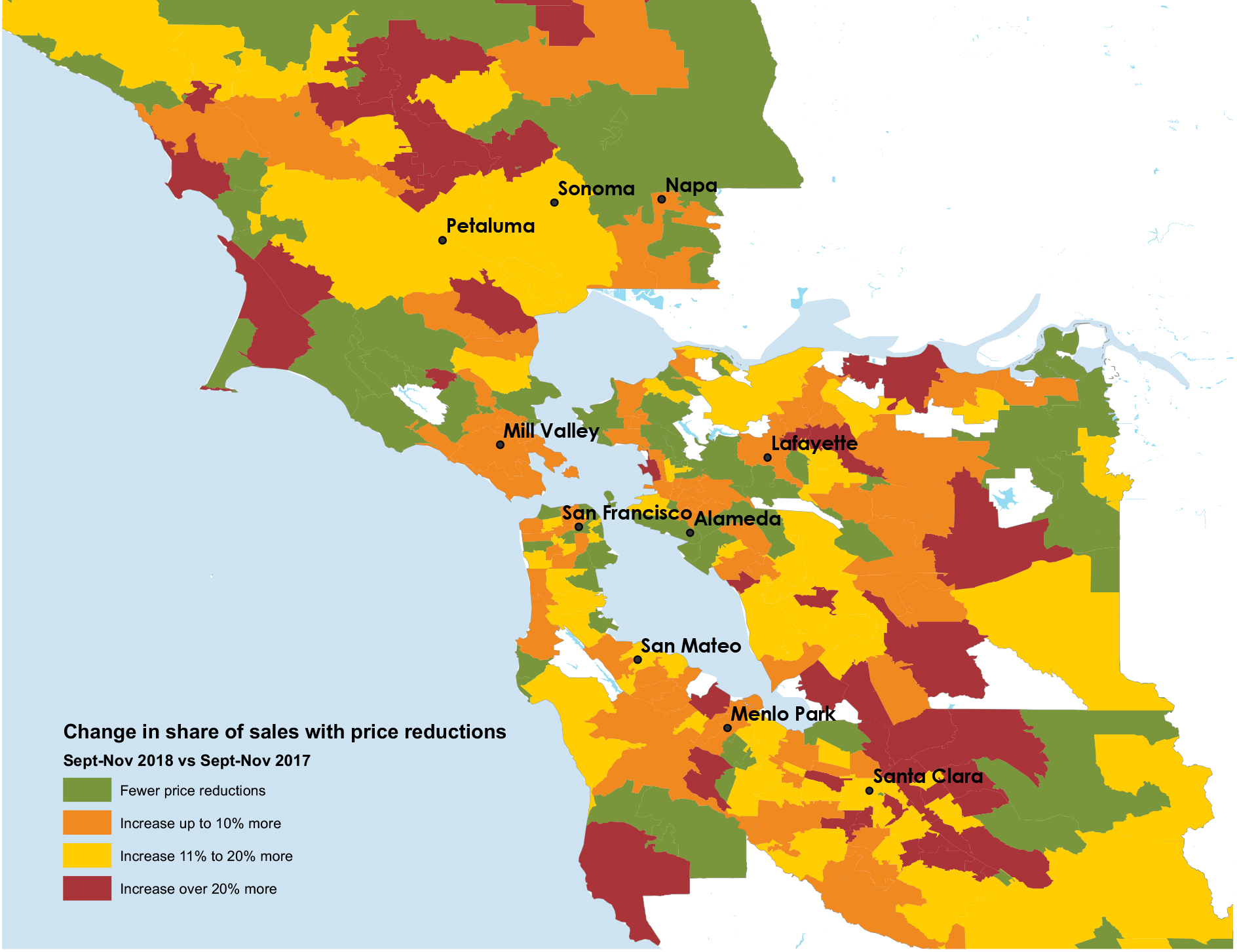 In conclusion, while expectations over slowing price growth and diminished buyer frenzy have come to fruition, inventory gains have exceeded most forecasts. Existing homeowners may find that with home price growth reaching a plateau, they are in the best position to sell now. There may be other reasons that more sellers have chosen to list their homes, including the cost of living in the Bay Area. However, as the local economy remains strong and the unemployment rate keeps trending lower, new inventory is providing more choices for buyers who would like a Bay Area home to call their own.

Selma Hepp is Compass’ Chief Economist and Vice President of Business Intelligence. Her previous positions include Chief Economist at Trulia, senior economist for the California Association of Realtors, and economist and manager of public policy and homeownership at the National Association of Realtors. She holds a Master of Arts in Economics from the State University of New York (SUNY), Buffalo, and a Ph.D. in Urban and Regional Planning and Design from the University of Maryland.