With Aprils end, we now have 2 months of spring data unaffected by market activity at the end of 2018, when financial markets plunged. As of early May 2019, stock markets have recovered to hit new highs, interest rates are far lower than last years peak, and the region’s median house sales price has climbed back up to slightly exceed last year’s high.

However, by most parameters, the 2019 market is somewhat cooler than that of spring 2018, and no substantial year-over-year appreciation has occurred, as was typical in previous spring markets since 2012. This is a common dynamic around the Bay Area, and indeed, other markets have often cooled more dramatically, with median price declines.

There are still 2 more months of spring selling season data to come in.

The considerable jump in median house sales price from spring 2017 to spring 2018, a very strong market, is illustrated below, as well as the year-over-year stability, spring 2018 to spring 2019. (Mid-winter declines are common, more an indication of seasonality than anything else.) 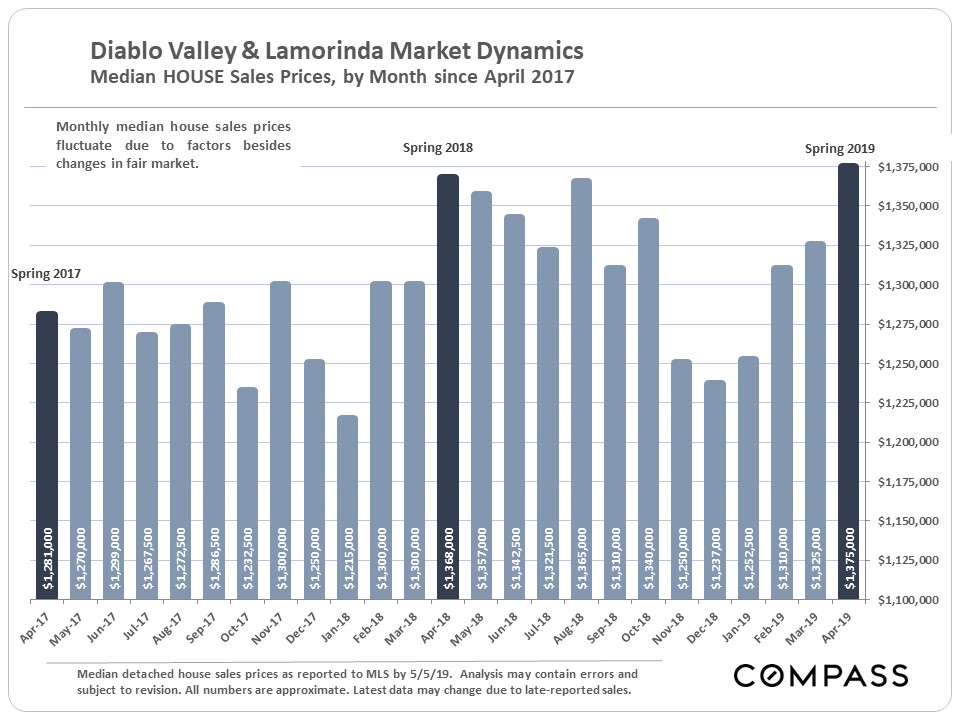 This table compares the March-April market statistics of 2018 and 2019. Generally speaking, there are some indications of softening in the supply and demand dynamic, but many of the changes are relatively minor. Median and average house values actually ticked up a tiny bit (but not to a statistically significant degree).

Full data for Q2, April through June, will be a more definitive indicator of market trends. 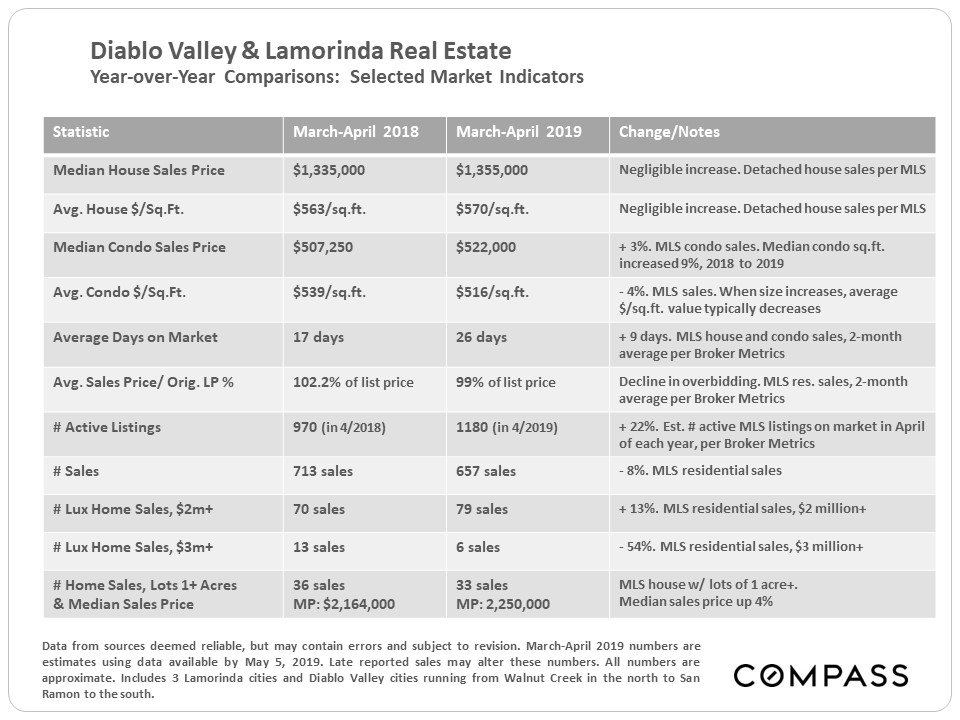 An illustration of the last 12 months of house and condo sales broken out by price range and number of bedrooms. These sales are spread across a wide variety of very different city markets within the region. 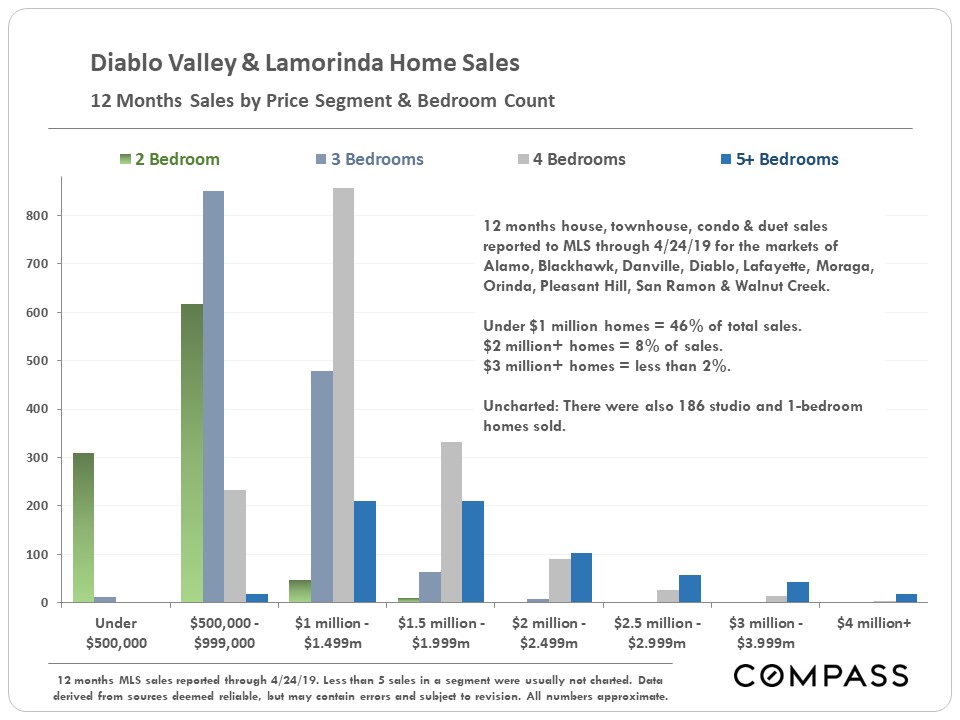 The next chart breaks out the number of detached house sales over the past 12 months by city, with median house sales prices, median square footage, and median bedroom/ bathroom count. (Median means half the sales were for more, or larger size, and half for less, or smaller size.) In most Bay Area markets, the median bedroom/ bathroom count is 3BR/2BA, but in Diablo Valley-Lamorinda, Pleasant Hill is the only city with a median of less than 4 bedrooms.

The community of Diablo usually features the largest houses and the highest median sales prices, but it is a tiny market. 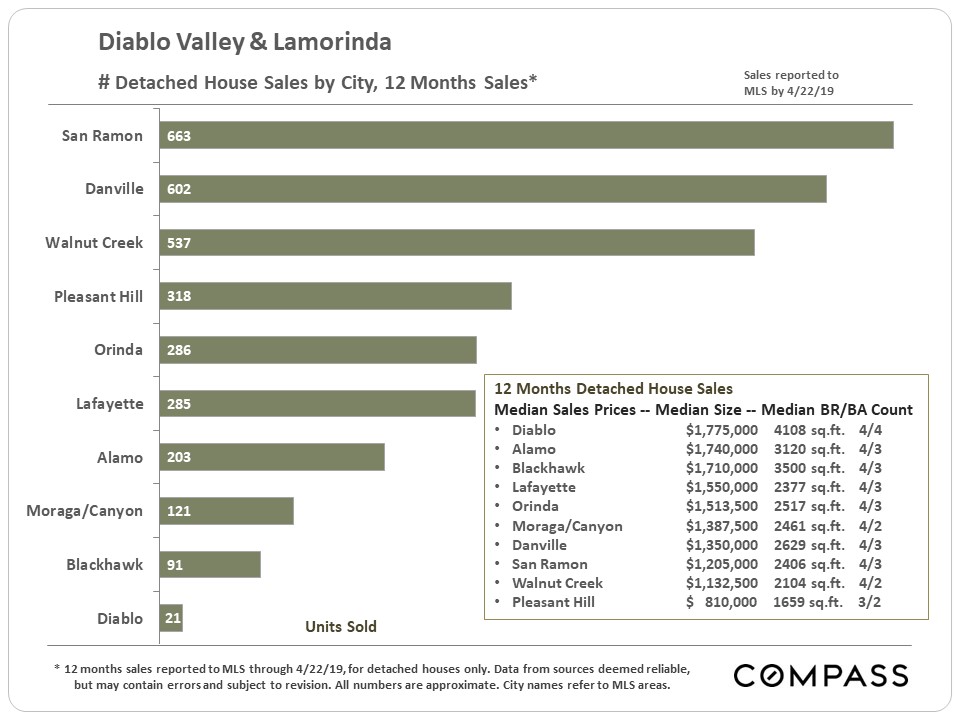 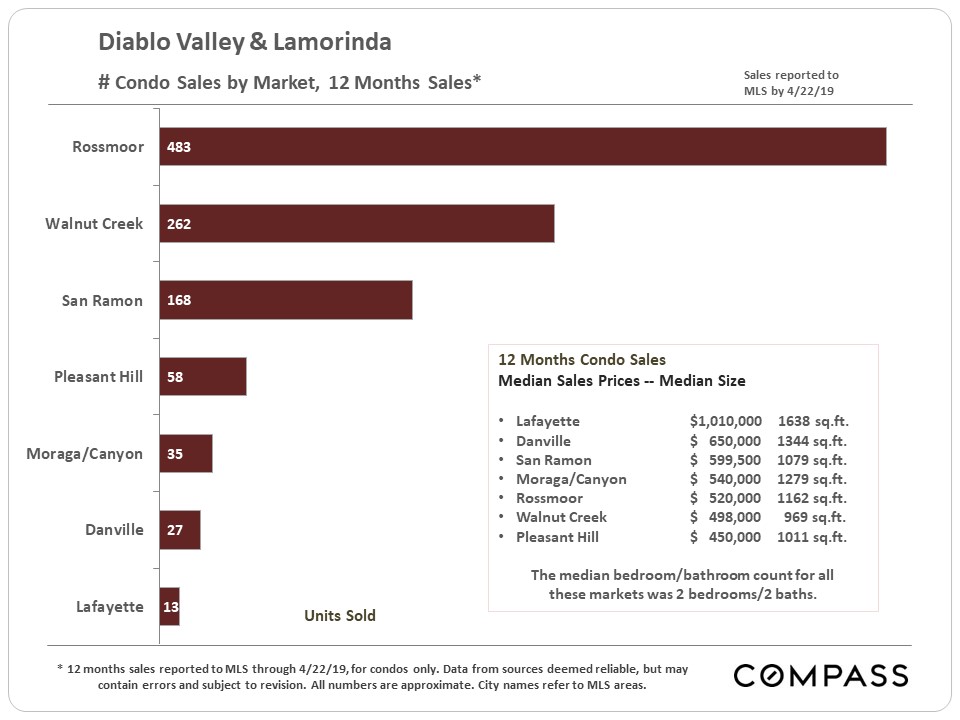 We typically define luxury homes here as those selling for $2 million+, and it constitutes a dynamic market segment in a very affluent region. 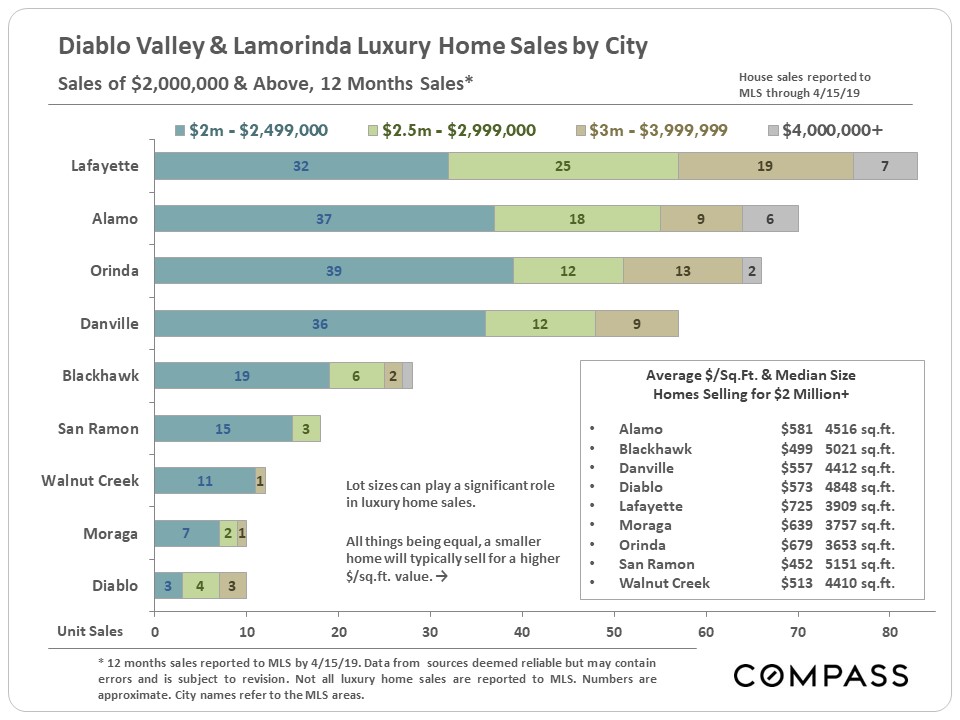 The softest segment of the market is the highest priced – $3 million+ – where the pool of potential buyers is smallest. In the 1st quarter, the inventory of listings was relatively high compared to demand, and for every 2 listings that sold or went into contract, 1 listing expired without selling.

The second quarter is typically the most active of the year for high-end home sales. 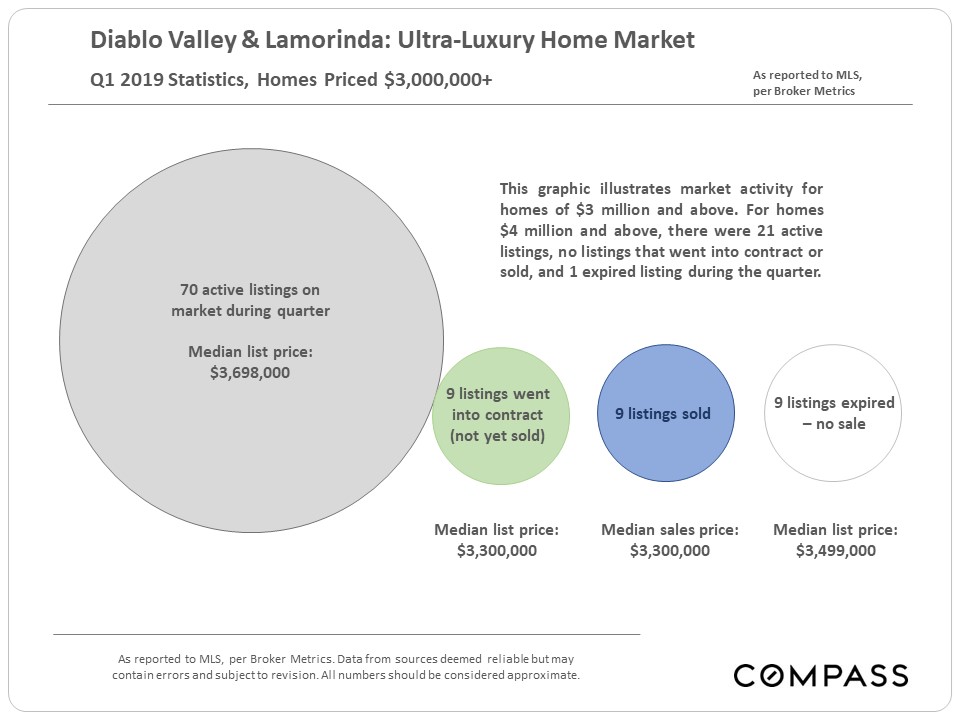 Many factors influence home construction size during any particular period: Affluence, economic conditions, household size, buyer age, land costs, population growth, bridge and highway construction, natural disasters, etc. Generally speaking, the median size of houses built earlier in the 20th century was somewhat larger than those built during the mid-century period – during and right after WWII. When the population and housing construction started to soar in the 1960’s, median home size began to rapidly increase until, currently, it is larger than ever. This bigger-house dynamic is common around the Bay Area.

Over recent decades, condos have become the major alternative for people purchasing homes of smaller size. 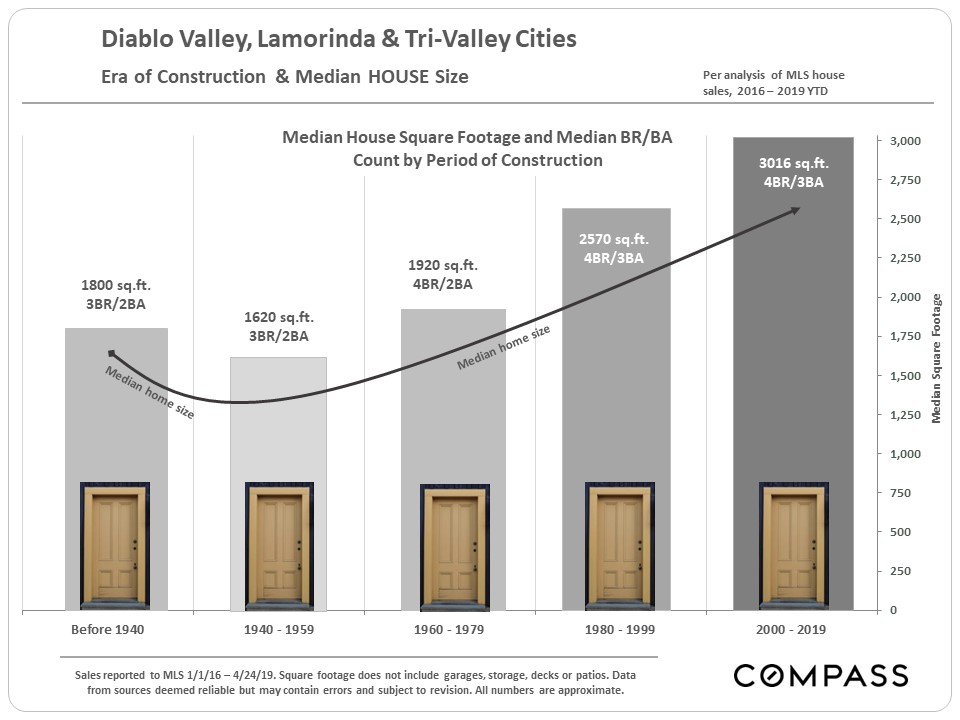 The chart below graphs annual county population increases since 2010 through mid-2018, per new census figures: Steady, but slowing somewhat in the last 2 years.

Measuring Bay Area population gains since 2010, Contra Costa ranks 3rd by both numeric increase (behind Alameda and Santa Clara), and by percentage increase – 9.6% (behind SF at 9.7% and Alameda at 10.4%). As a point of reference, 1940 to 1950, the county’s population increased by almost 200% – and it kept jumping dramatically for decades after. 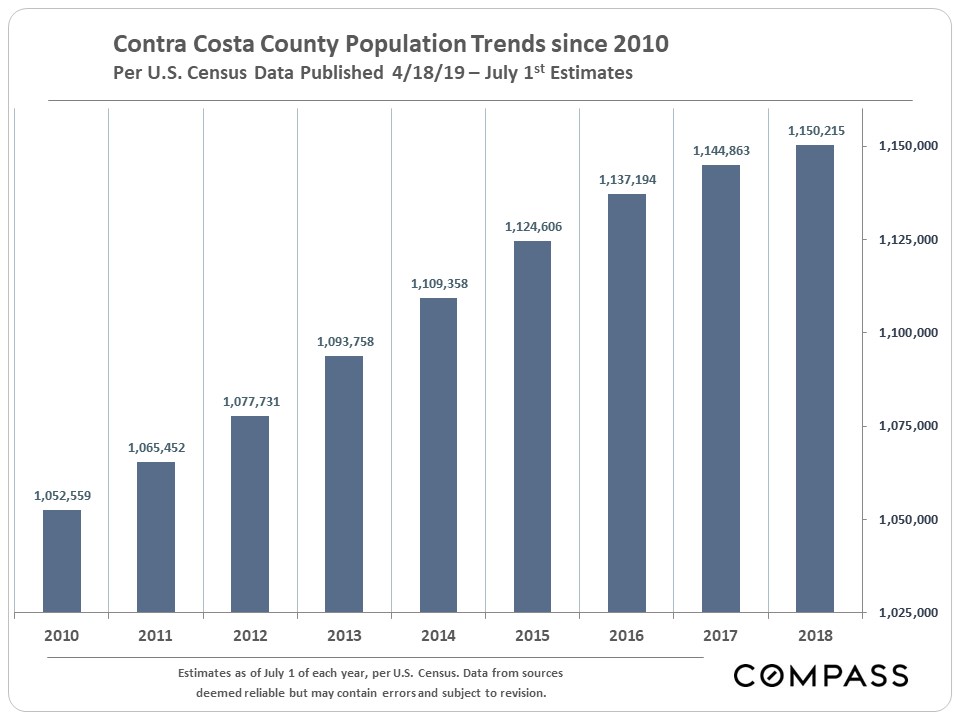 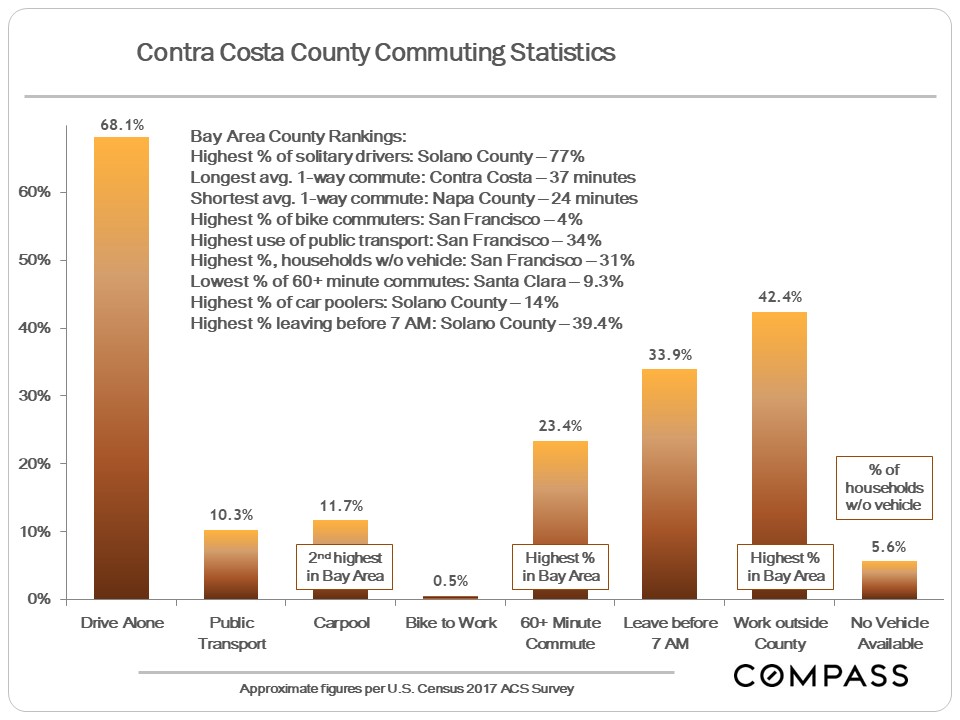 In recent years, the Bay Area has been the biggest destination of venture capital investment dollars in the country – and probably the world. These tens of billions of dollars have constituted a massive factor in the local economy, supercharging the creation of new companies, hiring, and, eventually, IPOs. Effectively, venture capital is seed money that in the last decade has exploded into the creation of stupendous amounts of new wealth. 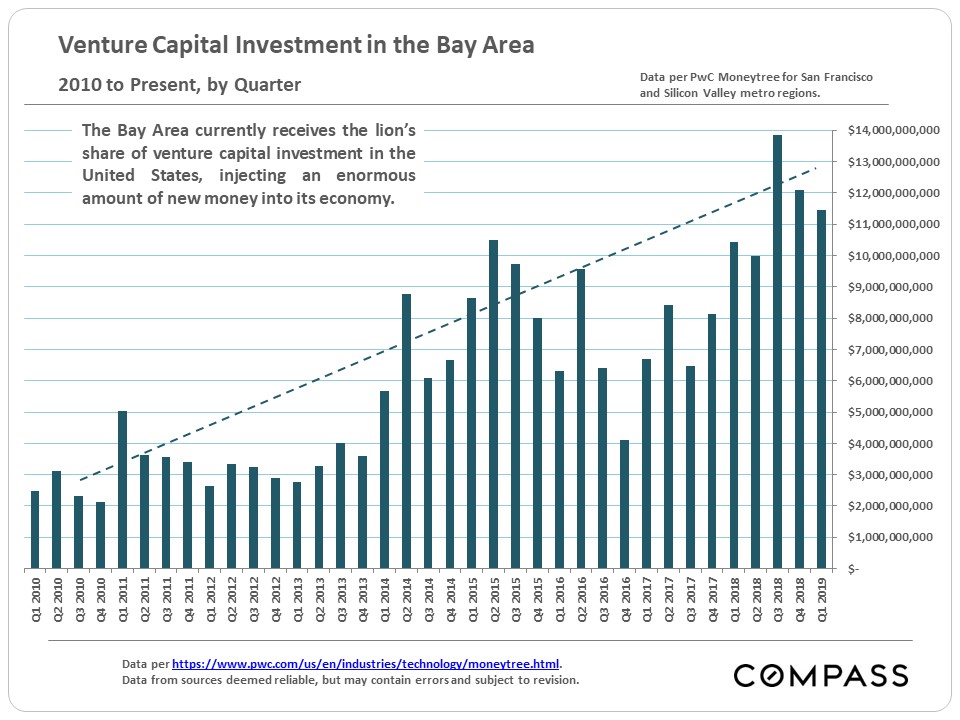