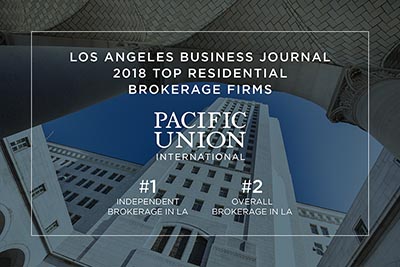 The Los Angeles Business Journal just published its 2018 list of the top residential real estate brokerages in Los Angeles County, and in a top 10 heavy with national corporations, Pacific Union International was not only the No. 1 independent brokerage but No. 2 overall in the county by sales volume.

Notable Pacific Union transactions in Los Angeles County include many record-setting sales: the second-largest sale in the history of Beverly Hills ($65 million); the second-highest sale in the history of Malibu’s Carbon Beach ($48 million); the highest and second-highest luxury condominium sales on the Wilshire Corridor ($20 million and $15 million); and the largest sales in Venice ($14.6 million) and La Cañada Flintridge ($10.6 million).

“A vision that emerged in late 2015 has come alive,” Pacific Union CEO Mark A. McLaughlin says. “We were committed to becoming the No. 1 independent real estate firm in the state of California, and we worked diligently to make that happen. We will continue to operate as a nimble, responsive, boutique organization.” McLaughlin went on to describe his company’s approach going forward: “As we grow, we do not add layers of infrastructure, and we consciously make decisions closer and closer to our real estate professionals and their clients,” he says. “This vision and strategy gives our organization pace and flexibility.”

Over the past 15 months, Pacific Union has expanded its California footprint through strategic mergers, beginning with the brokerage’s union with Los Angeles-based John Aaroe Group in December 2016.  In August 2017, Pacific Union merged with Partners Trust, then joined forces with Gibson International three months later.

While this ranking is a source of pride and reflects the professionalism of Pacific Union’s team of 900 Los Angeles real estate professionals, the company has its sights firmly focused on continuing the momentum. In February of this year, Pacific Union opened a new office in Highland Park, its 20th location; recruited three top-producing teams totaling 18 real estate professionals from a competing brokerage; and hired a leading expert from another major firm as its vice president of business development for Southern California.

“Momentum defines Pacific Union in Los Angeles,” company President Nick Segal says. “It’s being powered by our remarkable people, and the excitement they’re creating has just begun. We’re preparing to announce our 21st office, located on the Westside, in the next few weeks. Watch what we do next!”