Bay Area housing markets are off to a strong start in 2018, especially higher-end homes. While total year-to-date home sales numbers may suggest slower activity when compared with last year, the relative decrease is only due to fewer sales of affordable homes — those priced at less than $1 million. Generally, affordable homes have constituted the lion’s share of sales activity, but that number has been falling rapidly, from 69 percent of transactions in the first quarter of 2017 to 58 percent in the first quarter of this year. Overall, sales of homes above $1 million rose by 30 percent in the Bay Area in the first quarter, with relatively higher increases in the South Bay and Silicon Valley, but also in Sonoma and Alameda counties. Figure 1 summarizes year-to-date changes in the two price ranges across Bay Area counties.

The increase in higher-priced sales was particularly notable among homes priced above $3 million, which jumped by 45 percent in the Bay Area in the first quarter compared with last year. The largest jumps were in the South Bay and Silicon Valley, up by about 70 percent, and Sonoma County, up by 100 percent. Sonoma County is seeing increased post-wildfire housing market activity, with many transactions involving affected residential lots. 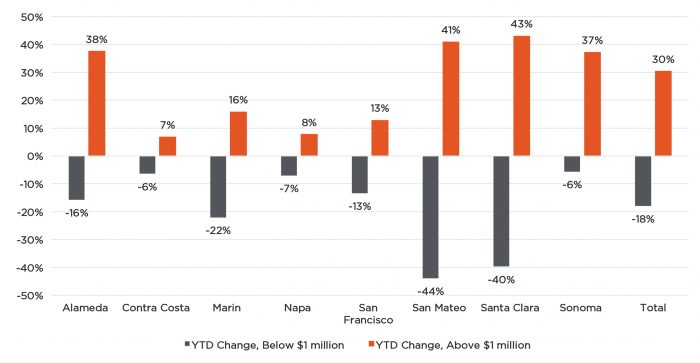 At the same time, inventory did not improve, not even in higher price ranges, where some increases last year helped with sales activity. In March, the Bay Area’s overall supply was down by 13 percent from last year, with homes priced between $1 million and $2 million down by 2 percent; those priced between $2 million and $3 million down by 7 percent; and those over $3 million down by 3 percent. Rapidly declining inventory in the Bay Area has been an issue for more than a year now. As Figure 2 illustrates, in April of last year, the annual change in inventory reversed from remaining relatively on par with the previous year to a considerable decline coming into the summer and persisting through the rest of the year, with average year-over-year declines between 10 percent and 20 percent. 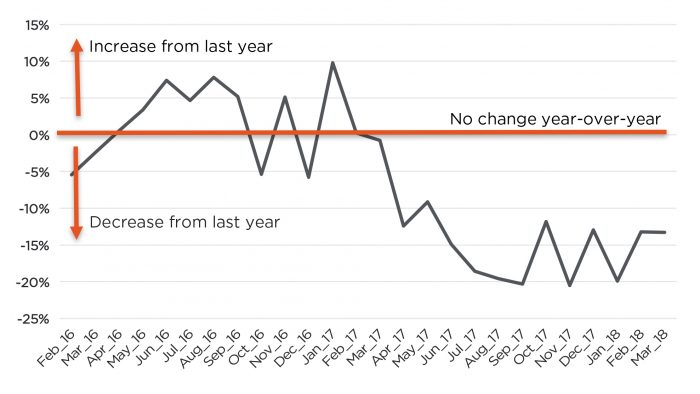 Additionally, to get a sense of what buyers face coming into 2018, we analyzed new-listing trends across the region in the first quarter, which declined by 3 percent year over year. Figure 3 captures the quarterly year-over-year changes in listings by price ranges across Bay Area housing markets. The lack of homes for sale is particularly notable in San Francisco, where all price ranges posted fewer listings. Keep in mind that the data captured here comes from Multiple Listing Services and does not account for new condominiums available in San Francisco that are off the market. However, according to The Mark Company data, new-construction inventory also declined by an average of 30 percent year over year throughout 2017. Figure 4 illustrates new-construction condominium inventory levels in San Francisco since 2012. After the 2016 peak, when there were 1,200 units for sale, inventory has now been cut in a half, with slightly more than 600 units available for sale.

Figure 3 again shows that the South Bay and Silicon Valley, while seemingly losing inventory levels at a 20 percent-plus rate, are seeing more new listings in higher price ranges than last year. Contra Costa County is the only region where new listings have improved in all price ranges, though affordable inventory barely grew from last year. Sonoma County also saw an increase in new listings over last year except for homes priced higher than $3 million. 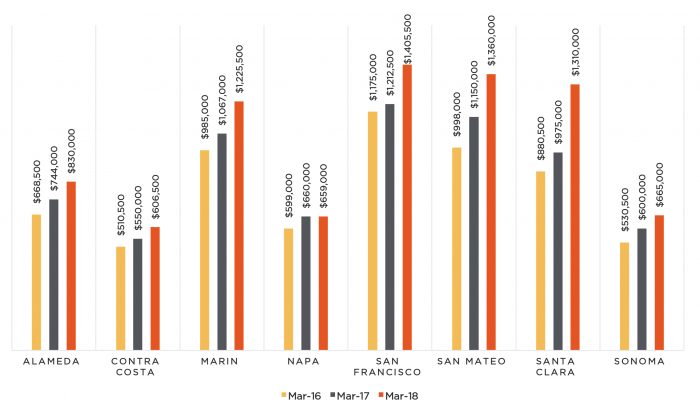 Furthermore, while no longer newsworthy, tracking buyer competition highlights just how competitive Bay Area housing markets are. We have reported on a regular basis how frequently homes sell for more than asking price and how that share has been continuingly increasing on an annual basis in the last three months. Figure 6 illustrates just how much the competition for homes has increased since the start of 2018. The red line accounts for all Bay Area data and shows that after dropping to 61 percent of homes selling over the asking price in January, the share in March surged to 74 percent. Last March, 64 percent of homes sold over the asking price, jumping from 46 percent in January. While the data does suggest some seasonal cyclical patterns, an upward trend has persisted across the regions and over time. Santa Clara County posted the largest increase from last January of 36 percentage points, from 50 percent in March 2017 to 86 percent in March 2018. Again, as we have noted in previous analyses, the increase may be in part due to changing pricing strategies of real estate professionals. Nevertheless, the trend is consistent across local markets. 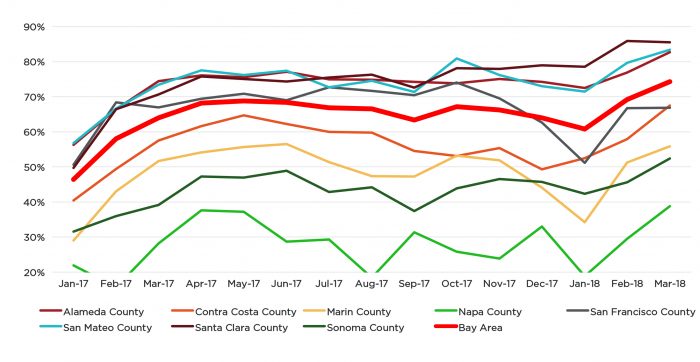 Taken together, home sales activity in the Bay Area remains robust. While overall sales may be dropping, higher-priced sales are maintaining an upward momentum and growing at a rapid pace. If the first quarter is any indication of what lies ahead, the upcoming spring homebuying season will remain competitive and possibly frustrating for buyers who face increasingly higher prices and fewer homes to choose from.