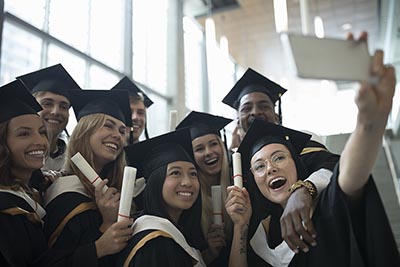 CALIFORNIANS DOING WELL WHEN IT COMES TO MANAGING STUDENT DEBT
Although student debt is widely considered one of the biggest hurdles preventing more first-time buyers from entering the housing market, Californians are making out quite well when compared with residents of other states.

That’s according to an analysis by WalletHub, which ranks all 50 states (plus Washington, D.C.) on student indebtedness and the job market based on 11 criteria, including average loan balances, number of residents with student debt, and unemployment rates. The analysis gauges states on a 100-point scale, with lower scores indicating a less overall level of student debt.

WalletHub asked a panel of experts their advice for minimizing student debt, which include seeking out scholarship opportunities, creating and adhering to a budget while in college, and acing advanced-placement courses in high school to reduce the amount of time necessary to earn a degree.

MOST BAY AREA TECH WORKERS SAY THEY CAN’T AFFORD TO BUY A HOME
Earlier this year, a report found that the Bay Area’s sky-high home prices are straining even highly compensated tech workers, and new survey results back up that research.

In a poll conducted by Teamblind, nearly 60 percent of workers at 13 big-name Bay Area tech companies said that they were unable to afford a home. More than half of tech employees at all firms surveyed cited difficulty affording a home purchase, ranging from 72.1 percent of those at Cisco Systems to 51.4 percent of Google workers.

So how are Bay Area techies coping with the region’s housing dilemma? In a separate poll, 61 percent of tech workers told Teamblind that they plan to seek more money because they believe they are underpaid. Other are packing up and leaving the region; earlier this summer, a survey from Bay Area Council found that nearly half of local residents plan to leave, due in part to high housing and living costs.

CALIFORNIA HOMEOWNERS TAKE OUT THE LARGEST REMODELING LOANS IN THE U.S.
Rising home equity and a lack of inventory are causing many owners to stay put and remodel rather than buy another property, with major Golden State cities leading the way for the largest improvement loans in the U.S.

That’s according to an analysis by LendingTree Chief Economist Tendayi Kapfidze, which says that homeowners in San Jose took out the biggest renovation loans in America in 2017, a median of $374,000. San Francisco was second for remodeling-loan size, at $291,000, followed by Los Angeles at $263,000. LendingTree says that these sizable loans are in line with California’s big-ticket home prices.

MORTGAGE RATES CLIMB TO FOURTH-HIGHEST LEVEL THIS YEAR
Although the Federal Reserve declined to raise interest rates last week, mortgage rates ticked up and are at their highest levels in almost seven years.

The latest numbers from Freddie Mac say that 30-year, fixed-rate mortgages averaged 4.60 percent for the weekend ended Aug. 2, up on both a weekly and annual basis. Fifteen-year, fixed rate mortgages averaged 4.08 percent, up from 3.18 percent at the same time last year. In a statement accompanying the report, Freddie Mac Chief Economist Sam Khater noted that he expects the strong U.S. economy to lead to higher inflation, which will lead borrowing costs to increase in the coming months.

“Even with home price growth easing slightly in some markets, mortgage rates hovering near a seven-year high will certainly create affordability challenges for some prospective buyers looking to close,” he said.