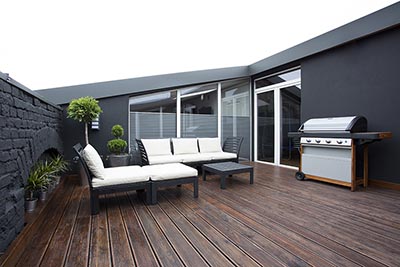 Summer officially arrived late last week, and California homeowners who have tricked-out their backyards for outdoor parties not only stand to have good times ahead but also higher home prices if and when the time comes to sell.

That’s according to a new realtor.com report, which analyzed more than 150,000 U.S. home listings to gauge where outdoor summer-fun features are the most popular and how much of a premium such amenities will command. Nationwide, the 10 states with the most home listings mentioning “summer” are almost all in areas of the country with brutal winter weather, including four in New England. (California ranks No. 9 in America for listings that mention summer, though that accounts for only less than 1 percent of homes for sale in the state.)

Barbecues, on the other hand, are mentioned in 9.5 percent of home listings in California, second in the U.S. behind Arizona. Golden State homes for sale that include mentions of barbecue list at $364 per square foot, 23 percent more than the average California listing. Similarly, fire pits, which are found in 5 percent of California home listings, add 22 percent to a home’s per-square-foot price. The state also has the country’s second highest number of listings with swimming pools — 2.8 percent — which causes list prices to rise by 14 percent.

The study comes not long after survey results from Houzz found that more than half of Americans who upgrade their homes’ outdoor spaces plan to entertain guests more. Fire pits are the most popular outdoor amenity in 2018, cited by 66 percent of the landscaping professionals that Houzz polled.

SAN MATEO COUNTY JOBS OUTPACE NEW HOUSING UNITS BY ALMOST 20-TO-1
With a 1.9 percent unemployment rate, San Mateo County had California’s lowest unemployment rate as of May, according to the latest numbers from the state Employment Development Department. And while Silicon Valley‘s job growth has been exceptional, it has the unfortunate by-product of reducing the region’s affordability and creating nightmarish freeway traffic.

Citing data from San Mateo-based Housing Leadership Council, Curbed SF reports that the county created 72,800 new jobs between 2010 and 2015 but constructed only 3,844 new homes. Worse still, most of the construction is in higher price brackets, squeezing out a significant portion of would-be San Mateo County renters.

Because of Silicon Valley’s extreme cost of living, many workers are forced to commute from California’s Central Valley and other far-flung communities. The region’s workers languish in traffic for about 37 hours each year, among the nation’s worst rates of congestion.

MARIN COUNTY RESIDENTS ARE AMONG THE NATION’S LONGEST-LIVED
Anyone seeking to maximize their time on this mortal coil would do well to secure a home in Marin County, where residents live almost as long as they do anywhere else in the U.S.

Those lucky enough to call Marin County home can expect to live an average of 83.8 years, the longest in America behind residents of Summit County, Colorado and Billings County, North Dakota. Realtor.com, the study’s author, cites Marin County’s generally healthy lifestyle and number of doctors — as well as its bans on public smoking and word-burning heaters — as factors contributing to its residents’ longevity.

But as realtor.com points out, in Northern California, living a long life comes with a big price tag. According to Pacific Union’s most recent monthly real estate update, the median sales price for a single-family home in Marin County was $1,450,000 in May, up by 4.1 percent year over year.