August home sales activity in the Bay Area posted another notable decline from a year ago, with sales down by 11 percent and across most counties. With the substantial August decline, year-to-date sales are now 2 percent below last year. Marin and Napa were the only two counties that saw sales increase from last year, which is a positive improvement from declines recorded in previous months. Alameda, Contra Costa, and San Francisco counties, which were faring relatively better this year, also posted sales declines in August, with activity in Alameda down by 13 percent and sales in San Francisco down by 4 percent.

Figure 1 summarizes August year-over-year home sales changes by county and by price ranges. Contra Costa was the only county where declines in sales spread across all price ranges. In Marin County, the previous two months of declines in sales of homes priced less than $3 million reversed in August and showed improvement over last year. Also, San Francisco and San Mateo counties continued to show strong growth in all price ranges in which inventory was available. Lastly, sales of homes priced higher than $3 million showed slower increases or declines in some areas after three months of solid improvement. 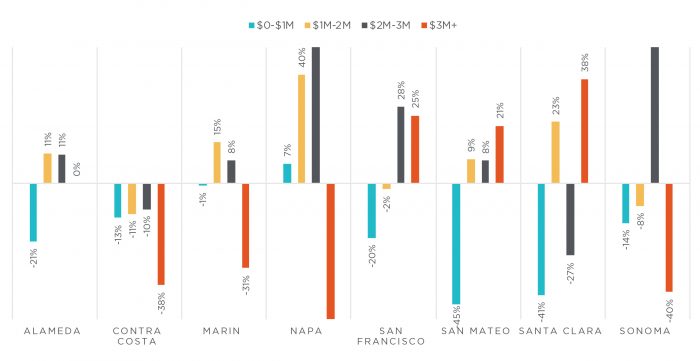 Figure 2 illustrates the three-year trend in sales of homes priced $3 million and higher, with activity peaking in May at 255 sales. Even with the slower increase in August, year-to-date sales are 32 percent above last year, with all counties except Marin and Napa seeing strong increases. Marin County has generally had a comparably slower increase in sales activity since the beginning of 2018 than other counties, while Napa is the only county to register an overall decline compared with last year.

Figure 2: Number of $3 million-plus home sales in the Bay Area since January 2015.

Bay Area inventory conditions continued to improve in August, marking the second straight month of year-over-year increases. Eighty percent of the overall 5 percent supply increase came from Santa Clara County, followed by Sonoma and Alameda counties. In Santa Clara County, inventory rose by 20 percent, while Sonoma and Alameda counties saw supply increase by a respective 15 percent and 7 percent. The other counties either showed a small increase or a decline. San Francisco continued to post a large annual decline in the number of homes for sale. Figure 3 summarizes inventory changes by region and price range. The buildup in inventory was primarily in the $1-million-to-$2 million range in Santa Clara and Alameda counties, though a few other counties saw some gains. Overall inventory was up by 20 percent for $1-million-to-$2 million homes, up by 12 percent for $2-million-to-$3-million homes, and up by 4 percent for homes priced higher than $3 million. The most affordable inventory continued to decline in all regions but Sonoma County, where the supply of homes priced below $1 million increased by 23 percent. 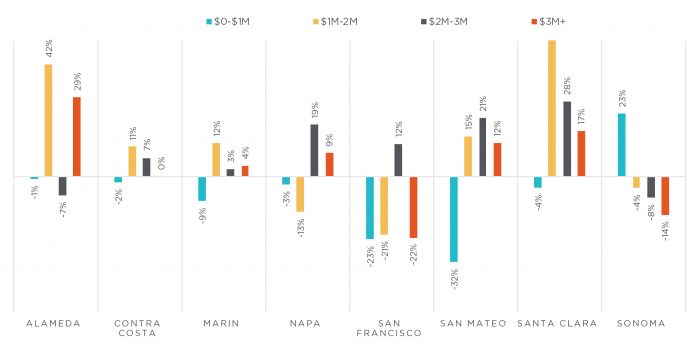 Figure 4 breaks down inventory changes by ZIP code, with red and orange indicating declines and yellow and green indicating increases from last August. For example, green areas suggest an increase between 26 and 77 units compared with last August. Thus, although Sonoma County posted an overall increase in inventory, much of the gain was in the northern part of the county, while Sonoma Valley continued to see large supply declines. Areas with larger increases in inventory — more than 50 units per ZIP code — include communities around south San Jose, Saratoga, Milpitas, Fremont, parts of Oakland, Danville, Livermore, and Dublin. In Sonoma County, most of the increase was in Santa Rosa, which was largely impacted by last fall’s wildfires. 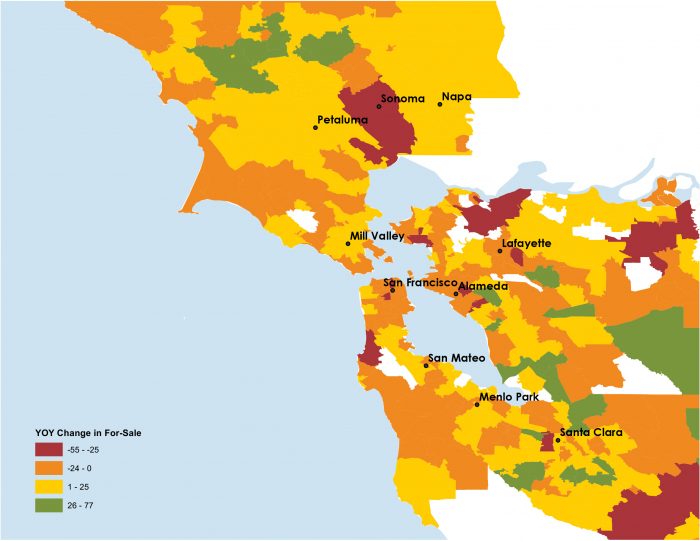 Nevertheless, despite slower sales activity and more inventory, home prices continued to increase. In August, the Bay Area’s median prices rose by 12 percent year over year, consistent with the previous month’s increase. Santa Clara County’s median price continued to grow at almost twice the rate of any other region, up by 21 percent from August 2017.

In March of this year, appreciation hit a two-year high, with the Bay Area’s median price up by 19 percent year over year. Since March, median price growth has slowed to 12 percent annual growth. The only county where price growth has accelerated since March is Napa, where 2018 got off to a slow start but has since picked up. The fourth column in Figure 5 summarizes where changes from March have been the most notable. Despite still showing solid appreciation, Santa Clara County has seen prices slow the most, down from a 35 percent annual increase in March. Marin and Contra Costa counties followed, declining from a respective 15 percent and 10 percent annual growth rate in March. In contrast, Alameda and Sonoma counties have posted the smallest declines in growth since March.

Finally, other housing-demand indicators suggest that trends that developed over the summer remained consistent in August. Absorption rates declined on an annual basis, from 43 percent last August to 37 percent now. Nevertheless, as noted in previous analyses, this summer’s market conditions were similar to those recorded in the summer of 2016. It appears that 2017 was the peak of the market demand. Again, absorption rates declined the most in Santa Clara County, down by 16 percentage points, from 55 percent last August to 39 percent today. Alameda and Sonoma followed in absorption-rate declines. On the other hand, San Francisco and Napa counties gained absorption momentum, with respective 6 percentage point and 3 percentage point increases from last year. Buyers of homes priced below $1 million are increasingly hitting their ceilings, with absorption rates dropping by almost twice as much as for higher-priced homes.

Similarly, price reductions are picking up, from 15 percent last August to 19 percent now, with most of the increase coming from Santa Clara County, followed by San Mateo County. However, as anticipated, affordability concerns are impacting budget-constrained buyers the most, with relatively larger reductions occurring for homes priced below $1 million and especially in Sonoma County.