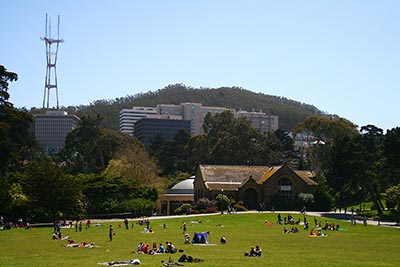 California dominates the upper rankings of an annual list of environmentally conscious cities, with San Francisco ranking in the top spot for the second year in a row.

That’s according to WalletHub’s list of 2017’s greenest U.S. cities, which ranks the 100 largest cities on a scale of zero to 100 based on 22 criteria in four main categories: environment, transportation, energy sources, and lifestyle and policy issues. Individual gauges of a city’s greenness include air and water quality, walkability and bicycle-friendliness, the number of commuters who drive, renewable energy sources, amount of farmers’ markets, and green jobs.

As in last year’s analysis, San Francisco ranks as the greenest city in America, with an overall score of 74.24. The City by the Bay comes in No. 1 in the U.S. for environmentally friendly lifestyles and policies and ties Honolulu for the most farmers’ markets per capita. San Francisco is also one of the five American cities with the fewest amount of residents who commute to work by car and one of the five most bicycle-friendly.

San Francisco also shines for its park system, scoring a perfect 100 in a separate study earlier this summer by nonprofit Trust For Public Land. That report found that San Francisco is the only major American city where every resident lives within a 10-minute walk of a green space.

Seven of America’s 10 greenest cities are located in the Golden State: San Diego (No. 2), Fremont (No. 3), San Jose (No. 5), Sacramento (No. 7), Irvine (No. 8), and Oakland (No. 10). Oakland and Fremont tie multiple other cities as No. 1 in the renewable-energy category, while Fremont ties Honolulu and Anchorage, Alaska for the highest percentage of green spaces.

While WalletHub’s analysis does not provide detailed information on cities’ walkability or green jobs, the Bay Area does well on both criteria according to other studies. Walk Score ranks San Francisco as the nation’s second most walkable city in 2017, with Oakland coming in at No. 9. And just last week, an analysis by SmartAsset found that those two cities are among the 10 best in the country for environmentally friendly careers, with green workers in San Francisco and Oakland earning respective annual salaries of $100,717 and $94,393.