The Bay Area’s incredibly strong spring homebuying season continued its run in April, with another jump in the median home price to $980,000, up by 15 percent on an annual basis. Prices continued rising at the fastest rate in Santa Clara County, up by 29 percent year over year, followed by San Mateo, Alameda, and San Francisco counties. San Mateo is now the most expensive county in the Bay Area, with the median home price — including single-family residences and condominiums — reaching $1.47 million. Figure 1 ranks Bay Area counties by their April median home prices.

To offer a better picture of which communities have seen the highest increase in median home prices year to date, Table 1 ranks 40 Bay Area cities by rate of appreciation (only cities with at least 20 home sales in 2018 have been included). Table 1 also summarizes the share of homes that have sold for more than asking price this year. San Mateo County communities with some of the highest median home price gains also generally saw nine in 10 homes sell for premiums. 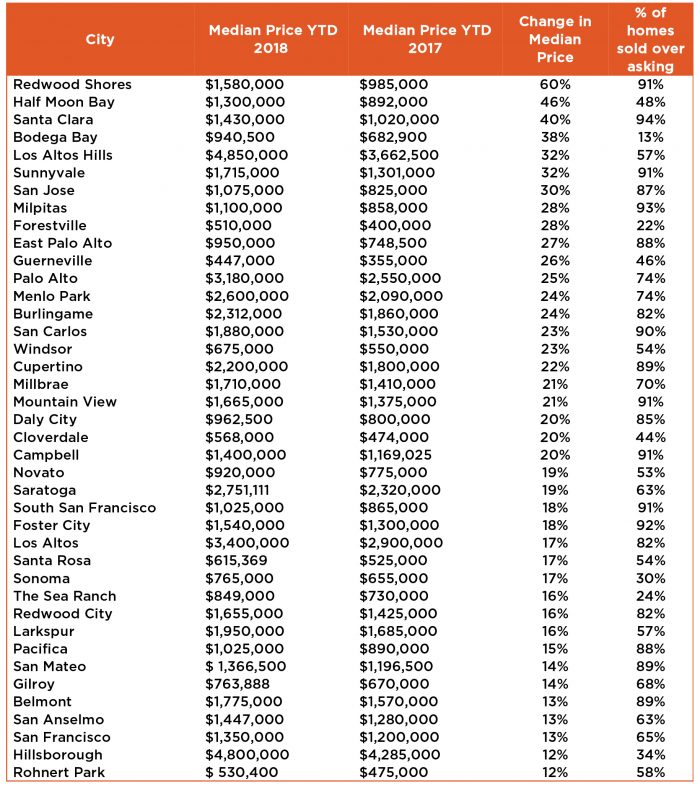 While rapidly rising home prices have characterized most of 2018 to date, homes sales were sluggish compared with last year. However, when compared with last April, home sales activity accelerated, and overall Bay Area sales rose by 5 percent. The increase was driven by Alameda County’s 10 percent jump. Santa Clara and San Francisco counties followed, each with a 7 percent increase, carrying most of the remaining gain in total sales. Sonoma was the only Bay Area county where sales declined from last April, down by 3 percent.

With April’s pickup in sales activity, overall year-to-date sales are exactly the same as last year. It’s not a surprise that the increase in sales activity was driven by higher-priced homes, particularly those priced between $2 million and $3 million. Sales in that price range increased by 35 percent from last April, and sales are 43 percent higher compared with the first four months of 2017. Figure 2 summarizes year-to-date changes in home sales activity by price range. Sales of higher-priced homes are generally up across the Bay Area, except some slowing of $3 million-plus sales in Napa and Marin counties.

Furthermore, other indicators also suggest that housing market activity heated up in April. Homes continued selling in an average of 11 days. Also, the share of homes that sold for more than asking price reached a new high, with 75 percent commanding premiums. San Francisco saw the largest monthly increase, from 67 percent to 73 percent, while Napa and Sonoma counties saw a bit of slowing in price bids. Nevertheless, even with San Francisco’s increase, keep in mind that this could be due to changing pricing strategies by real estate professionals. Still, premiums obtained for homes that sold for more than asking price also inched up from March, averaging 19 percent in San Francisco. Overall, Bay Area premiums averaged 13 percent, up from 12 percent in March and from 9 percent last April.

Lastly, while April generally kicks off the homebuying season and more homes hit the market, supply continued to trend lower than last year. Overall, inventory was 10 percent below last April’s levels, with the drag coming from inventory priced below $1 million. Nevertheless, there was some improvement regionally, with more new listings when compared with the same time last year. New listings jumped in San Mateo and Marin counties, up by a respective 18 percent and 15 percent. San Mateo County’s 18 percent increase was also the largest level gain, with 106 new listings coming to market. The increase was driven by homes priced between $2 million and $3 million, up by 124 percent from last April. Alameda, Contra Costa, and Napa counties also saw new listings priced higher than $3 million double, though such homes represent a very small share of overall sales in those counties.

Unfortunately, even with some pockets of improved supply, total monthly inventory continued to decline on an annual basis. However, with more new listings in some parts of the Bay Area, the inventory of homes priced above $1 million showed some recovery, with slightly more properties to choose from compared with last April. Figure 3 summarizes year-over-year changes in inventory by price range. The lines stretching above the red line suggest that current inventory levels are higher than during the same period in 2017.

Taken together, the spring real estate season is off to a robust start, with low inventory levels remaining the biggest obstacle for potential homebuyers. Nevertheless, with home prices continuing to reach new highs and fierce competition resuming, buyers may soon again find themselves fatigued and unwilling to move forward. 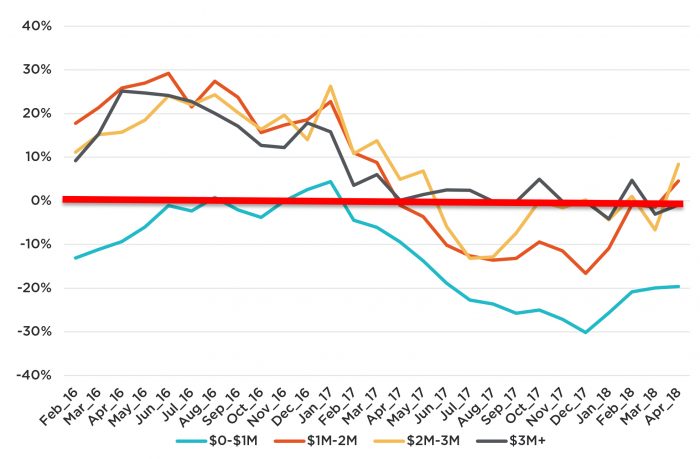