It is with almost no surprise to note that the Bay Area’s median home price kept rising rapidly in May to reach $1 million, a 17 percent year-over-year increase. All regions continued to post the same price growth trends observed in previous months. Marin County recorded the smallest annual appreciation, with prices up by 5 percent from last May. Still, with strong price growth in previous months, Marin County’s median home price has grown by 9 percent year to date. Year-to-date median price growth was the slowest in Napa County, up by 2 percent. However, Napa County also continued to see home sales activity lag, a trend that began last year. Santa Clara County saw the most median price growth in the Bay Area, up by 29 percent, followed by a 16 percent jump in Alameda County.

Overall, Bay Area home sales lined up with last May, with some regions seeing slightly more activity and some slowing slightly. Napa County saw the largest decline in sales from last May, down by 17 percent. San Francisco saw the largest sales gains, up by 7 percent. Figure 1 illustrates total Bay Area sales over the last three years, with orange squares noting sales in the last four Mays. While this year’s sales matched 2017, they were slightly higher than in 2015 and 2016. It will be interesting to observe activity over the next couple of months, when annual home sales typically peak. 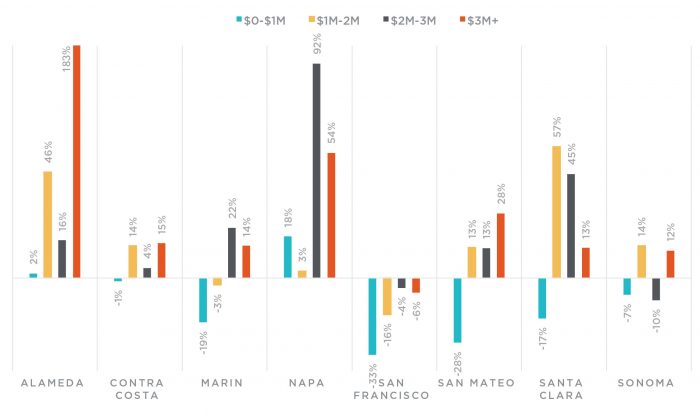 More new listings caused total inventory to decline at a slower pace than has been the case in recent months, though not enough to markedly improve conditions. Inventory dropped by 6 percent from last May, with declines seen in all regions, especially in San Francisco. Nevertheless, higher-priced inventory improved, with the largest jump in homes priced between $1 million and $3 million. Figure 3 illustrates inventory levels by price range over the last three years. What stands out is the large increase in supply between $1 million and $2 million, which is now at the highest level in three years. The biggest driver of the jump was the increase in inventory in Santa Clara County, up by about 350 homes from last May, followed by Alameda County, up by about 150 homes. More inventory will certainly boost June sales in those counties, as it has helped drive sales in the previous couple of months. The inventory of homes priced below $1 million now represents only about half of properties on the market. Two years ago, that price point represented two-thirds of the inventory.

Furthermore, other housing-market indicators also suggest strengthening buyer demand. In May, homes generally sold in 12 days, the same pace of sales as last year, and even in higher price ranges. Homes priced between $2 million and $3 million in Napa and Sonoma counties lingered somewhat longer on the market in May, though homes priced above $3 million in those regions sold much quicker than they did last year. As previously noted, overall indicators for Napa and Sonoma counties suggest some slowing in the $2-million-to-$3-million price range.

Nevertheless, homebuyers remain persistent and continue to fuel housing demand in the Bay Area. Recent mortgage rate hikes could have caused some buyers to expedite their search or even enter the market sooner than they were planning. As our recent mortgage-rate analysis showed, while further Federal Reserve interest-rate increases are expected, mortgage rates are not projected to rise at the same pace and are already very close to their new longer-term average.

The question now is which housing-market indicators will be the earliest signs of a tipping point in this cycle. A lack of inventory, strong employment growth, and tech advances that lead to speedier real estate transactions make it difficult to rely on traditional gauges such as sales, inventory increases, days on market, or even the ratio of sales price to list price. The number of price reductions could be an indicator worth watching going forward, though at this point, it still suggests tightening in the market. Figure 4 illustrates changes in the share of sales that had price reductions between this May and the year prior. Negative changes suggest fewer reductions than last year, while positive changes suggest an increase in reductions.

Other than a few outliers for the highest-priced homes in the East Bay and Sonoma County, there were generally fewer reductions than recorded last year. Sonoma and Napa county markets are still recovering from last October’s wildfires, which is affecting patterns. In Alameda and Contra Costa counties, the drop in price reductions for homes priced higher than $3 million also follows more bidding wars, suggesting that fewer reductions reflect more demand for the price range in those areas. Figure 5 illustrates the share of Bay Area home sales with price reductions going back to 2005. Following the spike in reductions between the turmoil years of 2008 and 2012, reductions have oscillated relatively steadily since 2013 and have followed traditional housing market seasonality. May was generally the lowest point in the year. Over the last year, the seasonal increase was relatively smaller, reaching only 15 percent, where in the previous five years it peaked at more than 20 percent. Also, the market reached the trough in March this year, with only 7 percent of homes requiring price reductions.

Figure 4: Change in the share of price reductions by Bay Area county, May 2017 versus May 2018 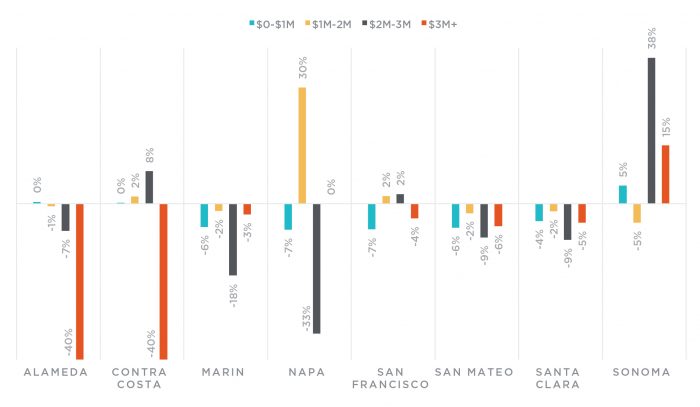