Skip to content
Which Home-Remodeling Project Do Owners Most Regret Doing Themselves? 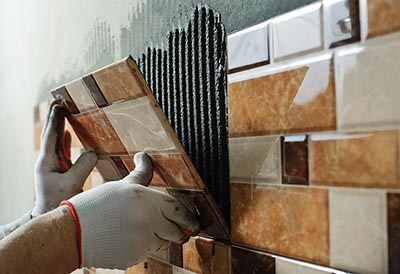 Taking a do-it-yourself approach to home improvements can save owners a significant amount of money and give them a sense of accomplishment, but those who do not have much remodeling experience should likely expect at least one misfire along the way.

In fact, 63 percent of homeowners surveyed by ImproveNet regret doing at least one of the average eight renovation jobs that they have undertaken. For projects that went wrong, one-third of homeowners called in a professional to fix what they botched.

Installing tile floors is the improvement that homeowners most regret doing themselves, cited by 40 percent of those surveyed. Around 30 percent of homeowners told ImproveNet that they were dissatisfied after attempting to add or expand a room, upgrade walls and ceilings, and install new cabinets and counters.

Fifty-five percent of homeowners who admit that their renovation job went off the rails said that it took longer than they anticipated, an average of an extra 22 hours. The top jobs likely to exceed the projected time frame are repairing a home’s foundation, installing a patio of a walkway, and painting the property’s exterior.

About half regret going DIY because the renovations were physically or technically more demanding than they were capable of. Such projects include upgrading a home’s roof, landscaping, installing a backsplash, doing electrical work, and building furniture.

Saving money is by far the top reason that homeowners make improvements themselves, cited by 56 percent of respondents. And indeed, the approach can yield positive financial results; a NerdWallet report released late last year estimates that homeowners who are handy enough to renovate a kitchen or a bathroom without the help of a professional can save more than $20,000.

Even if DIY home remodeling can sometimes produce less-than-ideal results, the benefits can go beyond monetary ones. In its 2019 Remodeling Impact Report, the National Association of Realtors found that owners who improved their homes themselves were more likely to be pleased with the results than those that turned to a contractor. And more than eight in 10 of respondents to that poll said that they felt a major sense of personal accomplishment upon completing the improvements.